As some of you may know last weekend was a weekend filled with historical sport events in the UK. With both the Grand National and the boat race covering our television screens for the majority of the weekend. It was a weekend to celebrate sport and be inspired once again. These events don’t come around often so I feel there is always somewhat of a buzz in the air. They are events that millions of people across the country take time out of their day to watch. Sports which people probably wouldn’t ordinarily support however that deters nobody, everyone is still able to come together; have a few drinks, and celebrate the sports for what they are.

The boat race is an annual boat race between the universities of Oxford and Cambridge. It has been held almost every year since 1929. Although originally held on the prestigious waters of Henley-on-Thames it has been held on the river Thames in London since 1839. The race is 4 miles and 374 yards long and races from Putney to Chiswick with the direction of the flow. It has, since its conception, been a highly contested and tough event resulting in many famous stories. One notable one was the 1877 race which is the only ever boat race to have resulted in a dead heat. The story goes that the umpire on the finishing line fell asleep under a bush when the race finished, an incident that lead him to judge it “a dead heat to Oxford by four feet”. More recent incidents involve a swimmer, Trenton Oldfield, interrupting the 2012 race by swimming in-between the two boats mid-race in a protest against elitism. This sparked widespread controversy as the race had to be abandoned and re-started due to Oldfield getting in the way of the boats. Upon the restart Oxford were found out of their water and too close to Cambridge resulting in Oxford snapping an oar and thus losing the race. With crew mutinies, sinkings and abandonments the boat race is never a boring affair.

Knowing this years race would be no exception I headed down to London and the banks of the river Thames with my girlfriend to join the 250,000 other spectators and watch the boat race live. We got there nice and early so we could enjoy the day, get a few drinks in, and find a good spot to watch the race from. We chose to watch from Hammersmith bridge as there was lots of pubs and places to eat, even a large screen up so we could watch the end of the race once the boats had gone past us. It was a really good day, although it was overcast the heavy rain stayed away and we were only moistened by a brief drizzle.

The first race up was the Isis/Goldie boat race, in other words the reserve boat race. This features rowers who are in both the Oxford and Cambridge boat race squads however they just didn’t make the cut this year. It can be tough putting in all that effort and training ~30 hours per week to not make the top boat however that hardly seems to phase them. Even Chris Fairweather who had been moved down from the top Oxford boat just two weeks prior to the race maintained his focus and drive to succeed. He managed to succeed as he stroked the Oxford ‘Isis’ boat into an extremely comfortable win over Cambridge. When the crews came past us, just before the half way point, Oxford already had a comfortable few lengths advantage over Cambridge so it was clear that they would win. This was good news for Oxford in more ways than the purely the win. This is because the reserve boats often give a good indicator of the depth of each boat race squad. In other words a strong reserve boat indicates a strong first boat, often it is the case that whichever university wins the reserve boat race will win the actual boat race.

Fortunately for Oxford this year they were already strong favourites to win the title, a title that they have won 7 out of the past 10 boat races (although Cambridge have a slight overall lead with number of wins). In recent years both boats have been criticised by a large proportion of both crews being from other countries on one year periods of ‘study’ at the universities, when the main reason for them being there is to row. This year saw Oxford’s boat have a number of international rowers in its ranks. All this added to the crew’s immense experience preparing them to dominate the race. 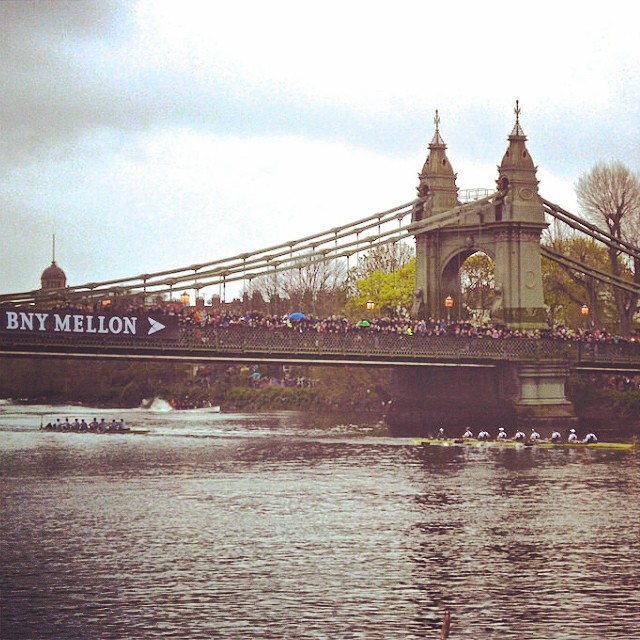 With Oxford winning the coin toss they chose to have the starting station on the Surrey side, a side which has been favoured in previous years though there have been almost equal wins from both starting stations. The race, as always, started quickly with intense rate, Oxford opened out a slight lead of a few feet. However with the first bend of the river favouring Cambridge they clawed this advantage back and took the lead. After the bend Oxford lengthened out their stroke and their shear power and experience pushed them into the lead. They were about a quarter of a length up when the collision happened.

Right from the word go the umpire had been warning both crews to remain on their racing lines towards their own banks. However the Thames has a distinctive flow pattern and is much faster in certain areas. As the crews were racing with the flow it is more beneficial to be in that fastest water. This water is directly in the middle of the two racing lines for the majority of the course and therefore both coxes try to use as much of it as possible. However on this occasion the Cambridge cox had strayed too far into the faster water, and too close to Oxford. The Oxford cox, who was holding the racing line on their side did not move over and allow Cambridge the space. This meant the crews came very close together, all the while the umpire warning Cambridge to move back over to their side. Unfortunately for Cambridge the inevitable happened and they clashed oars with Oxford. This resulted in the oar of Luke Juckett twisting slightly as he inserted it into the water, making it hard for him to remove from the water at the end of the stroke. As his oar was under the water, acting like an anchor, it ripped round in its gate taking him out and sending him off his seat. Fortunately after about five strokes he managed to get back onto his seat and continue rowing but by then the damage was already done. The oar had almost brought the Cambridge boat to a standstill, all the while Oxford opened up an even more convincing lead.

By the time the crews came past us at Hammersmith we could tell the race was all but over. However my girlfriend and I, along with a lot of people around us were supporting Oxford so it was cheers and drinks all round! We then rushed over to the big screen to catch the last few moments of the race. Oxford seized victory yet again. It was be Constantine Louloudis’ third consecutive win during his time at Oxford, meaning he would leave having never lost the boat race. A very impressive achievement, he also has a bronze medal from the GB eight at the London Olympics so I am sure he will go on to win many more events in his rowing career.

Although Cambridge mounted an appeal about the collision nothing was ever going to come of it as it was their own fault that they had crashed. Once the crews were off the water, celebrations and commiserations ensued as the rowers met friends and received their medals. After that all that was left was to throw the cox into the river, an obligatory tradition of the winning crew, a tradition that would not make me want to be a cox. Slowly people receded back to their warm homes from the river banks whilst the 15 million people at home just switched of their televisions. It was all over for another year. However next year there will be another event added and the start of a new tradition. 2015 marks the first women’s boat race on the river Thames, as it moves from Henley, so there will no doubt be even more competition for boats next year!