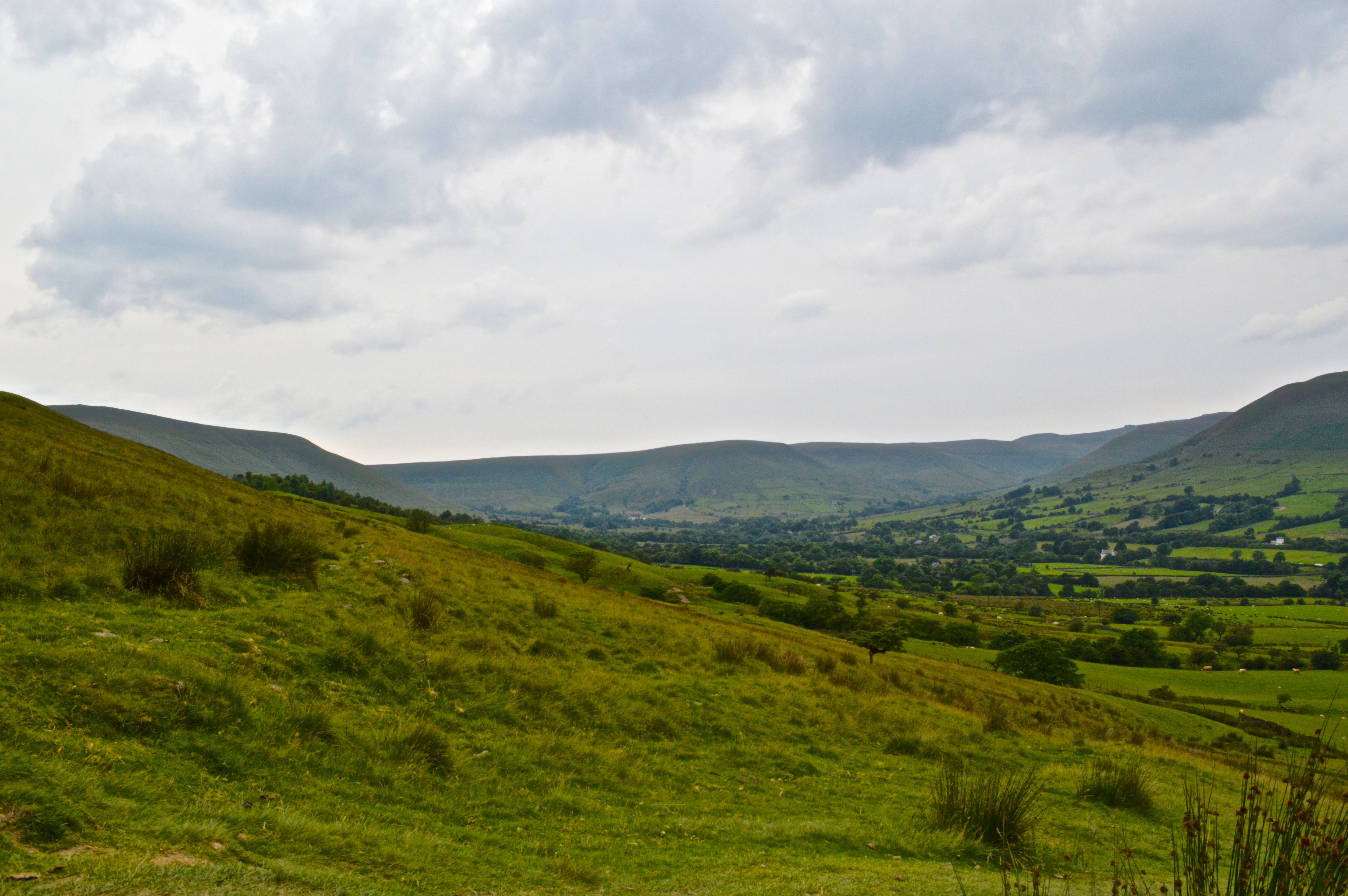 The sun was shining through the windows of my kitchen, Wimbledon was on in the background and my girlfriend Alice and I were sat down with a lovely cup of tea. I decided to look at the weather for the next few days, sunny and warm. We both agreed that we should make the most of it and had wanted to go on another walk in the Hope Valley part of the Peak District for a while. It was simple, we both came to the conclusion at the same time instantaneously, we would go on a hike.

I went upstairs to my ‘adventure shelf’ and swept the contents into my Alpkit Hunka along with my trusty MSR tent, we were going to make the most of this fantastic summer and have a micro-adventure. Alice took care of the food department making some amazing sandwiches and sausages, which would become snacks and dinner along the way. We paid a quick stop to the local supermarket to get some more tasty snacks, and a bottle of wine, and then we headed down to the train station. It was quick, simple, and the train only lasted a few minutes. This was partly because it was only a couple of stops to Edale but also because we were so excited to be off on an impromptu adventure. 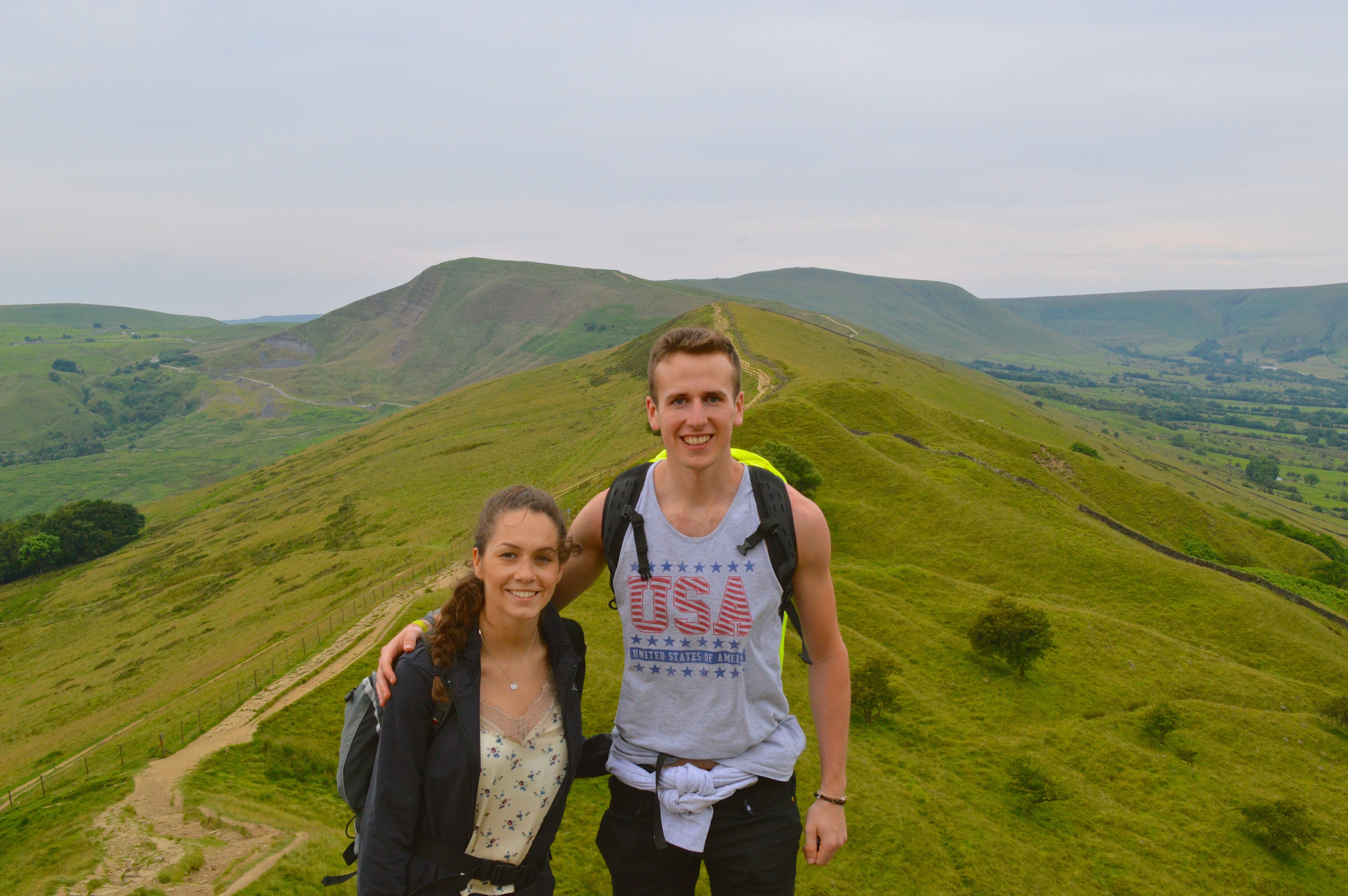 Tweeting updates along the way we quickly found a route using the Peak District OS map. We came up with a plan to head up to the ridge near Mam Tor so that we could get amazing views back down into the Hope Valley. We could then walk along the ridge towards Hope, camp somewhere away from the wind and then pop down into hope the next morning to catch a train home. Our plan was simple and as we found out it is often the most simplest idea which yields the most fun. We had little expectations, we were just there to enjoy the views, the terrain, and the weather. As it was a weekday the trails were silent with just the occasional rambler. It felt as if we had the Peak District to ourselves. 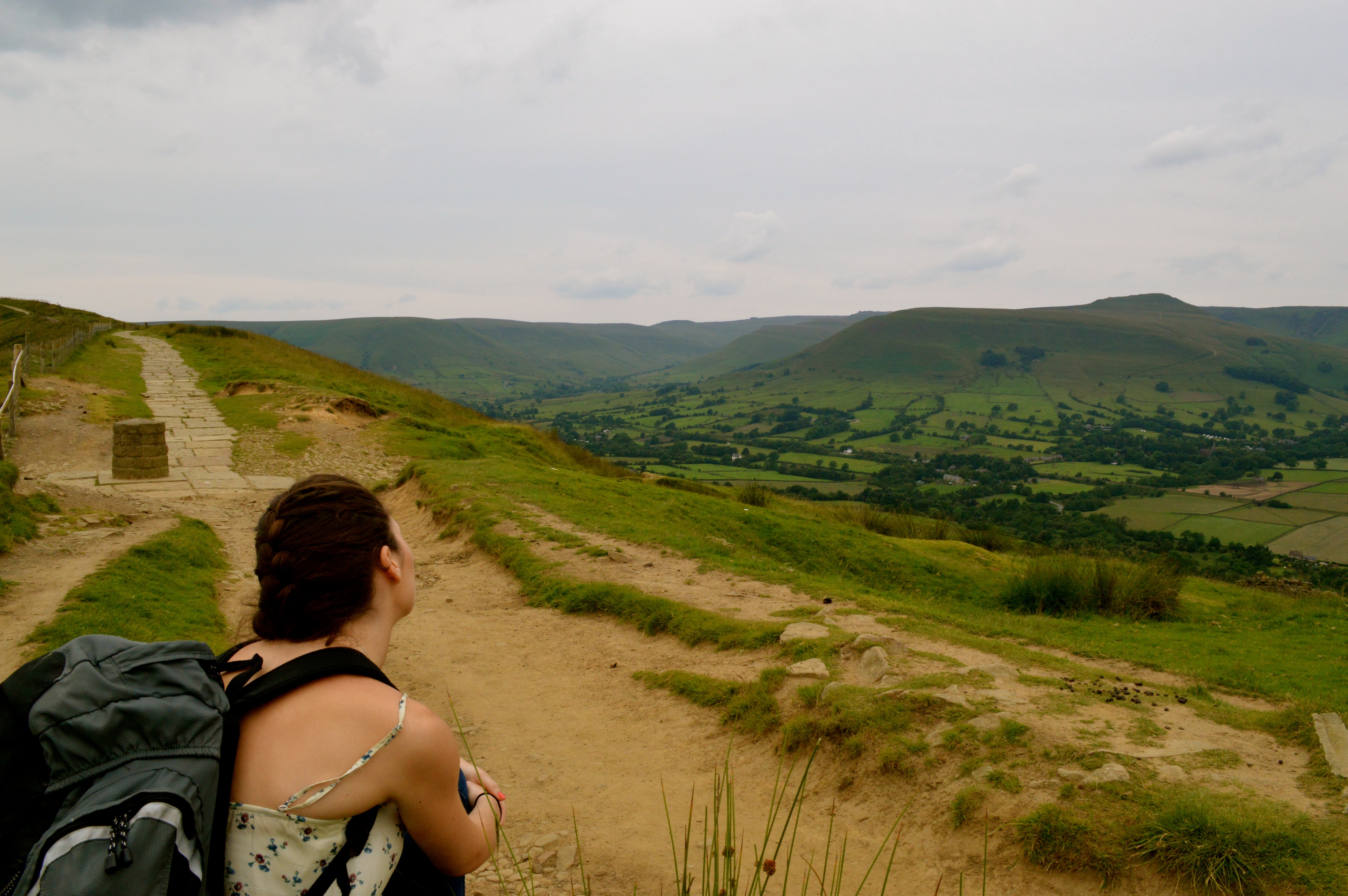 We stopped often to take photos, eat more food, and just relax. There was no rush in anything we were doing, we just chilled and took everything as it came, chatting and enjoying each others company. Hiking up to the ridge proved to be tough work, we were hardly in walking gear. Both of us in jeans and sweatshirts, we hardly looked like people out on a micro-adventure, probably looking like teenagers experiencing life in the country for just a day. However we were comfy and enjoying ourselves and that is all that is important. We wandered along the ridge for quite a while, until the sun was approaching the horizon, before we began to look for somewhere to wild camp. With all our food, our coke-can stove, and the MSR tent this was going to be a very comfortable wild camp. This was reassuring as it echoed the relaxed feelings of the day. The evening was still warm at over 18˚C so we lay back on the poncho, which we were using as a picnic blanket, and ate our dinner to the audience of the local lambs. When the sun began to set the temperature rapidly dropped so we quickly got a fire going with my flint striker and put on a couple of fleeces each. We chatted and read our books, doing some research for our coming trip to Thailand before we put up the tent and retreated for the night. The sheep all nestled into their coves on the hillside so slowly the ‘baa-ing’ ceased. The wine by now had gone to our heads and made us nice and sleepy too so we quickly drifted off. 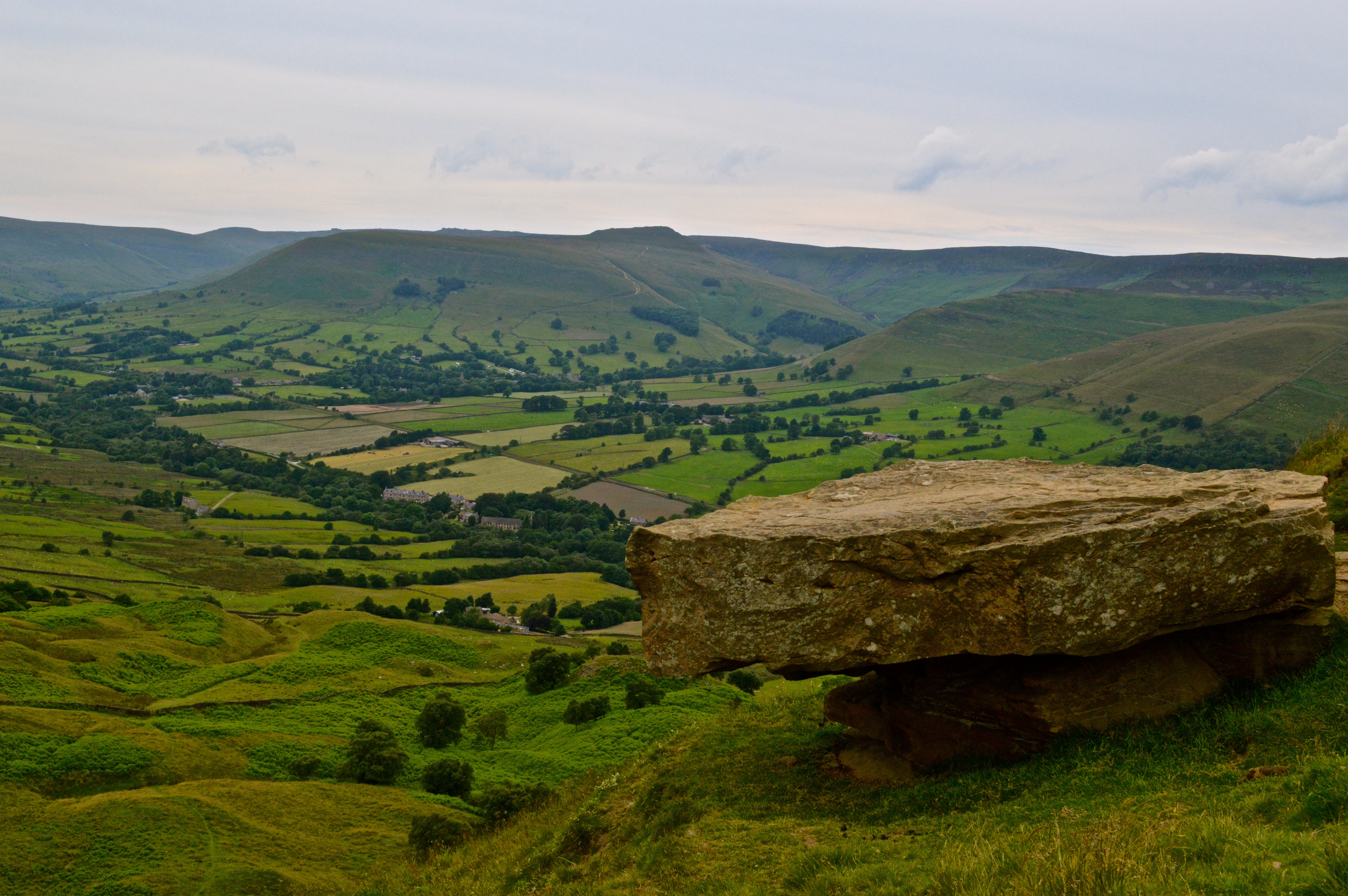 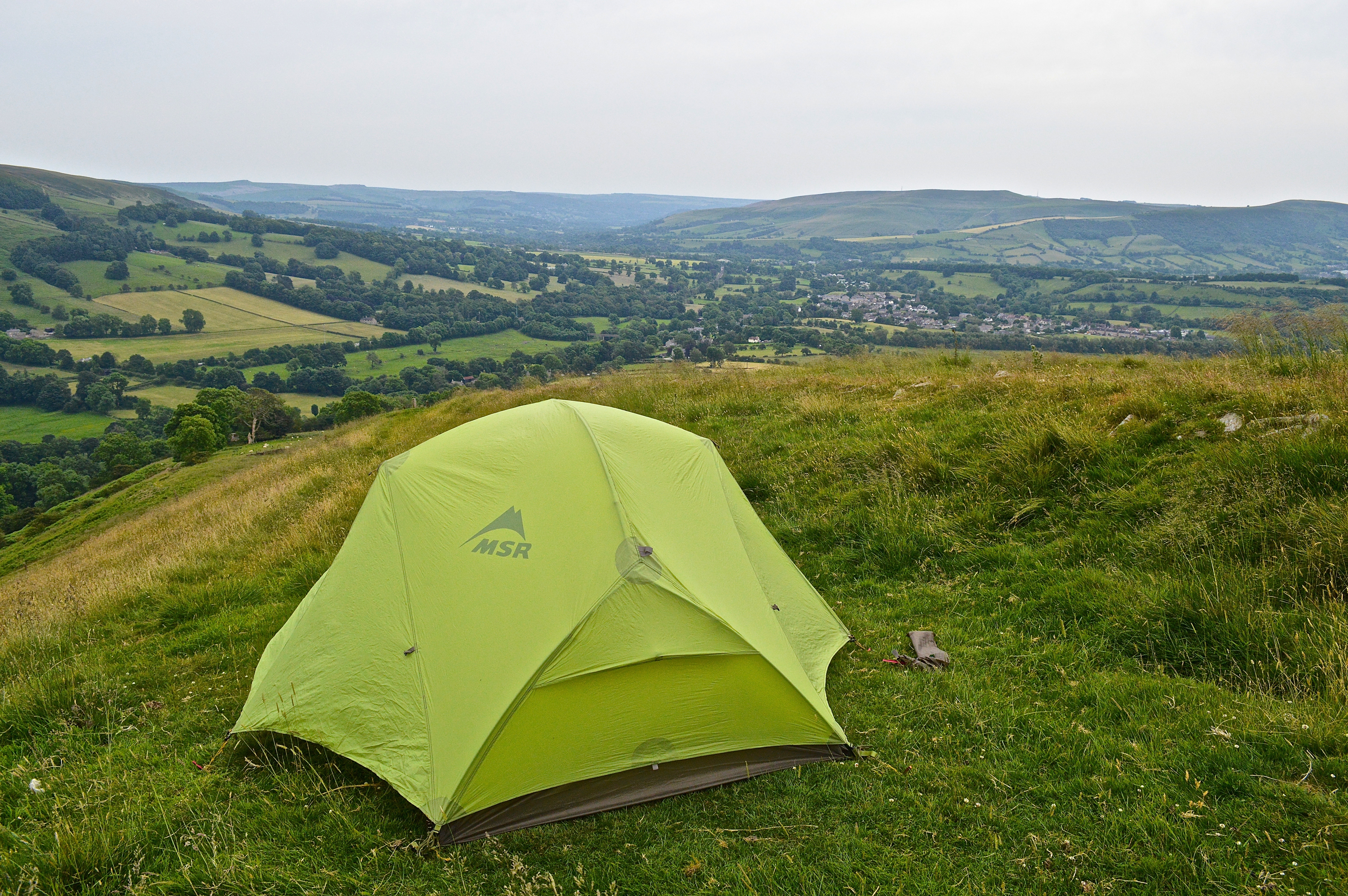 Sunset outside our tent

The next morning, in true micro-adventure fashion we rose bright eyed and bushy tailed, nice and early. We poked our heads out of the tent to take in the amazing view. This had been a great nights wild camp. I hadn’t even used a sleeping mat because I found the ground so comfy. Unfortunately once we finished our breakfast of more sausages, apples, and frusli bars those drops that our synonymous with the north of England began to fall. Fortunately the rain was short-lived and very fine, however it did a good job of soaking the tent just before we had to pack it away. Our spirits were not dampened in the slightest. Being brought up in Manchester we have been trained to carry coats and deal with the rain so we mustered on and once we started walking again, with smiles from ear-to-ear, the shower passed. We wandered down the slopes, the rest of the valley yet to stir from their sleeps. As we finally neared the town of Hope life was beginning to emerge. We strolled down a street towards the train station. To any passers-by we were two teenagers up uncharacteristically early for a walk. Little did they know that we had just been on an amazing micro-adventure and were actually on our way home to tell others of our experience.