Going on a trek was one of the things I wanted to do most when in Thailand. From the Northern city of Chiang Mai many are available varying in duration, activities, and location. It is possible to book one before you arrive but we found it better once we were there and we could get leaflets and check out companies on trip advisor to see if they were decent. This was how we found Travel Hub. Through this company we booked an ‘Earth Eco Tour’ which would last two days and one night, not very long because we were only travelling for three and a bit weeks so we were a little pressed for time. Included in the price we paid (1400 Baht [~£28]) was elephant riding, trekking, accommodation in the hill tribe, white water rafting, bamboo rafting, and all our meals. So it seemed almost too good to be true. Here is the story of the first day of our experience.

We woke early to ensure we would be ready for when our tour guide arrived at the hotel to pick us up. Our allotted time for pick-up was 9-9:30 however at 8:50 our room telephone rang away letting us know that he was here and we needed to hurry. Hurriedly we headed downstairs with our large rucksacks, which the hotel would store for us whilst we were trekking. Whilst trekking we just carried small day bags containing a change of clothes and other items that were on the checklist supplied by travel hub. Our guide Ping introduced himself to us once we were downstairs, he seemed very friendly and immediately handed us both a form to sign so that we would be insured during the trek, £28 and insurance this was great value for money. Ping then showed up outside to a pick-up truck with two benches in the back, we hoisted ourselves up and went off to pick up the rest of our group. There were 4 Spaniards and a French couple, making our group eight in total. Fortunately everyone was able to speak English so we could all talk whilst we were zooming away from Chiang Mai heading North into the mountains.

We drove for a while, with our surroundings gradually becoming more and more green. Our first stop we weren’t expecting as it was to a botanical garden which had a butterfly farm. It was a superb place to take photographs and I had never seen butterflies so big. Once back in the truck Alice and I noticed how the Spaniards were almost constantly smoking, something I am not a fan of and despite the openness of the back of the truck it did sometimes become quite smoky. We then stopped briefly at a food market so that Ping could buy food supplies for the next few days. This was the thing I was most worried about on the trip, no way to refrigerate meat and keep the flies off it, it would be the worst thing to fall ill whilst trekking in the middle of the jungle. I had also not yet eaten any meat in Thailand, just sticking to tofu, vegetables, and seafood so far.

Onwards we went in the truck, the roads thinning and wasting away to pot-holed mud tracks and the landscape becoming increasingly greener and more lush. Soon elephants littered the road so our progress slowed as we negotiated our way around them. A we were on the Earth Eco Tour, this means our tour is more sustainable, the elephants are well cared for and the money we spent on the tour would go and help the communities we visit on the tour, some of Thailand’s poorest communities. Eventually just as I thought my spine was going to be shaken loose from the terrible roads we arrived at the place we would ride the elephants. Alice and I were straight out of the truck and onto the elephant to begin plodding back along the road. It was a very uncomfortable experience, much more so than when I rode one in Sri Lanka. However it was amazing, being so much higher we could see so much more, the vast expanse of jungle, plantations, huge mountains, there was everything. It was quite tough taking photographs and videos on my contour yet still trying not to fall off the elephant. Fortunately after over 40 minutes of plodding we made it to the end, and amazing experience but very uncomfortable and I was definitely glad to have my feet back on the ground. Once we were off we got to feed the elephants, this was the part of the trip I imagine they enjoyed the most. 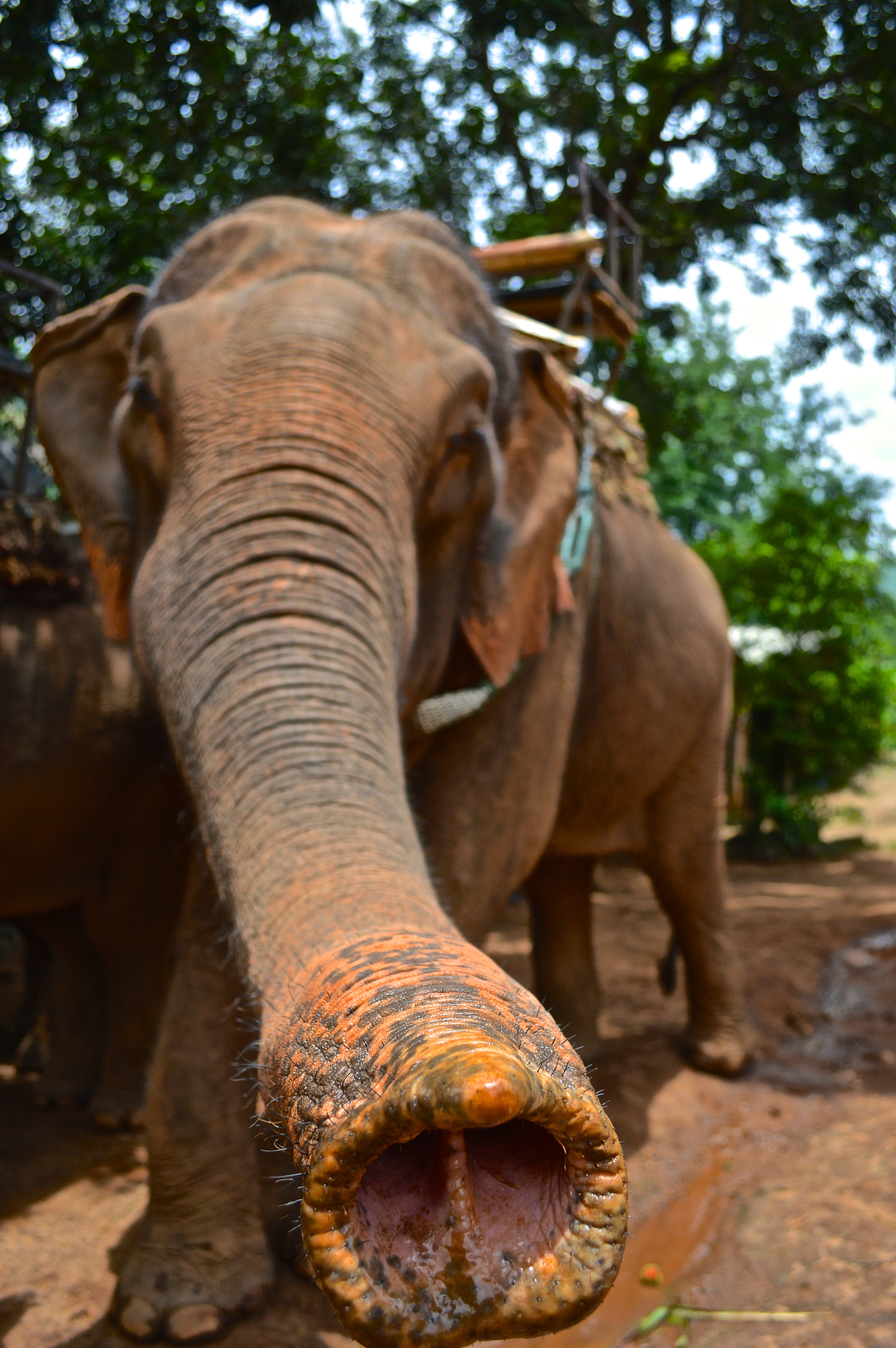 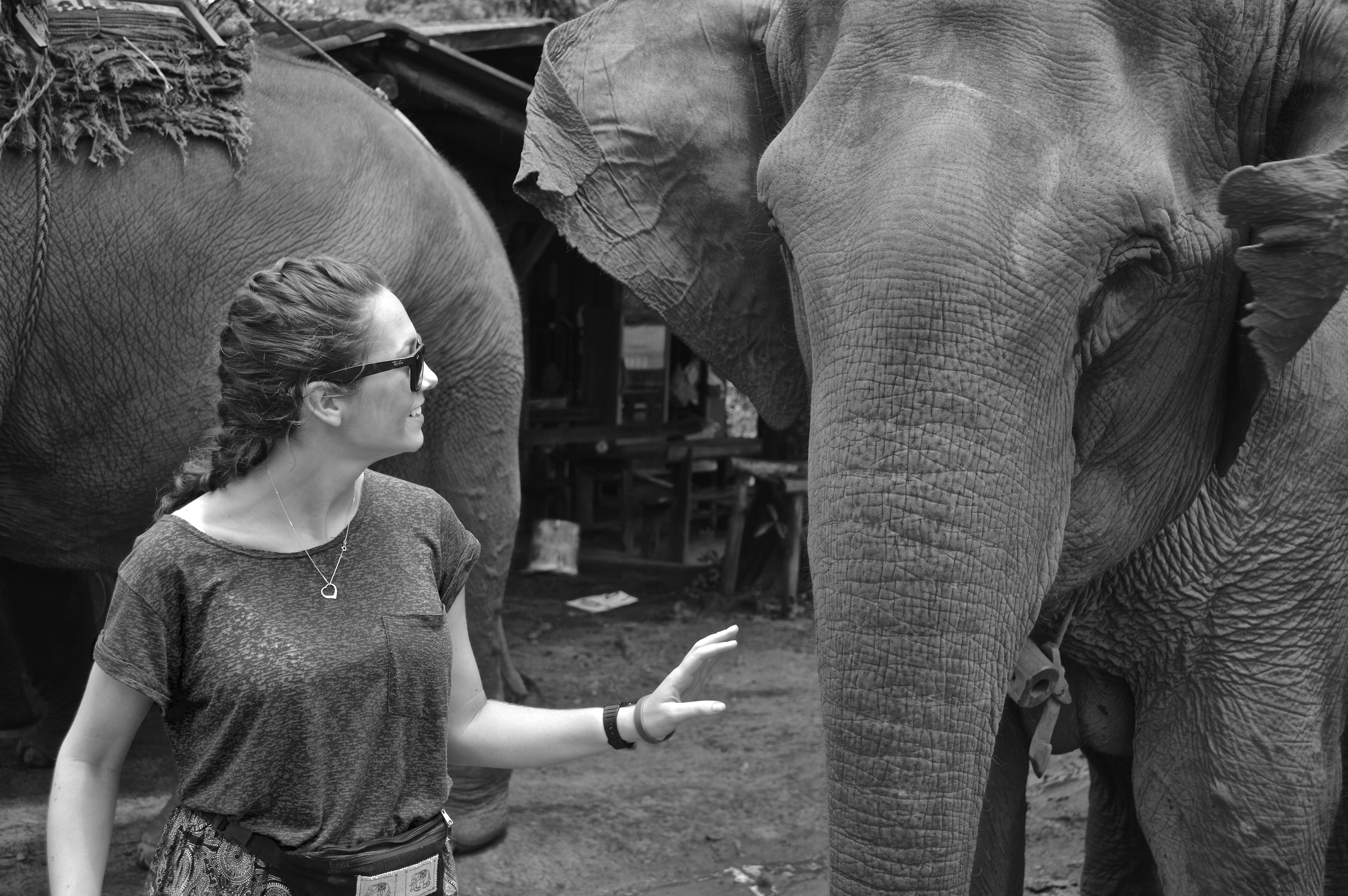 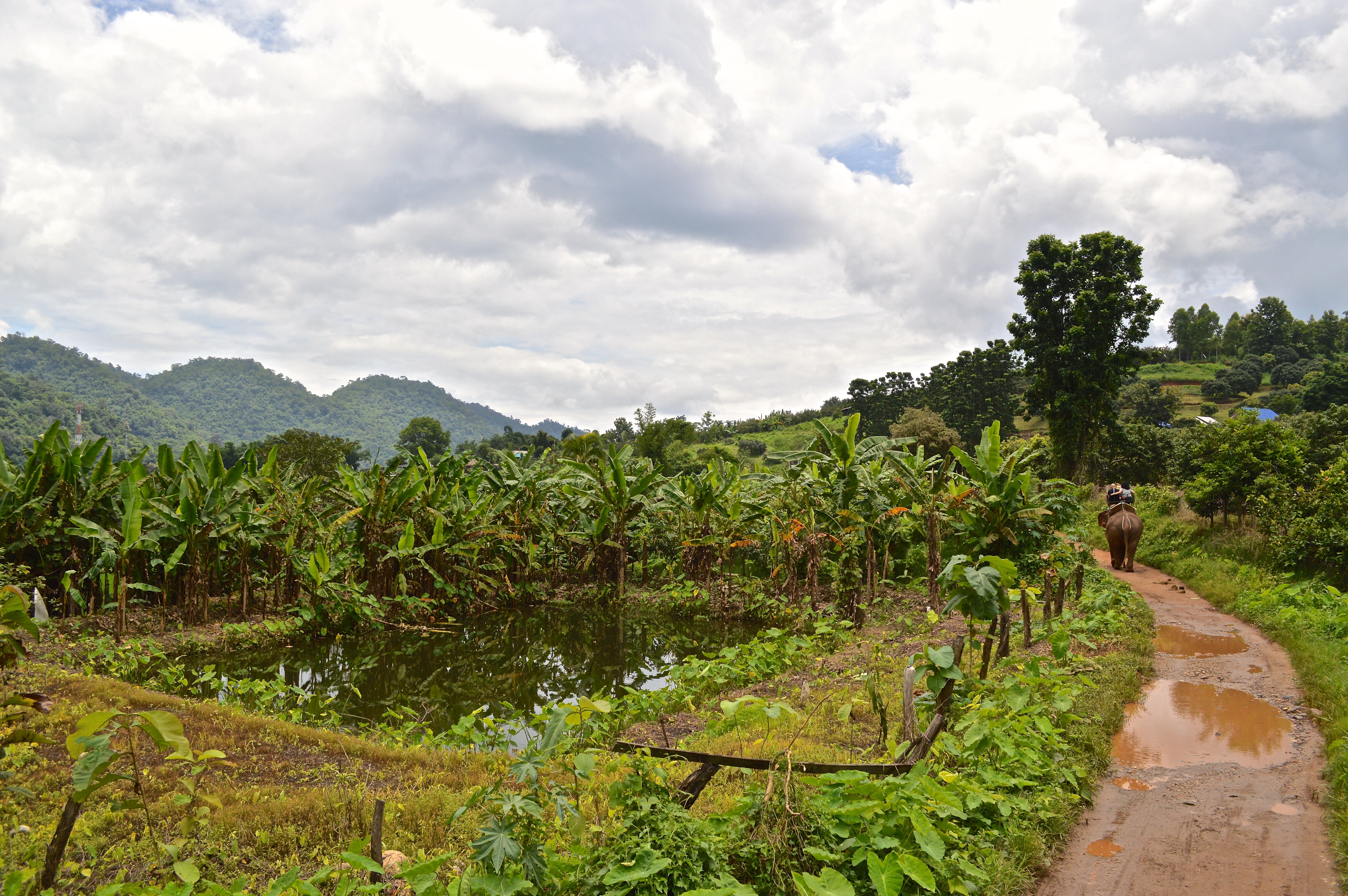 After the elephants a short truck journey took us to the bamboo hut over the river where we would have our lunch. When we arrived it was already waiting for us, wrapped in banana leaves, we opened them up to see what we had been served up. It was delicious, rice with tofu and spicy sauce it was so tasty. It didn’t look like much but it was very filling and certainly filled a hole. After covering ourselves in DEET after lunch we began walking immediately. Ping handed us each a walking bamboo stick and up we went. We had about 7 kilometres to walk this afternoon but it was all uphill and it was very steep going. Quickly one of the Spaniards, Lola, began to struggle, her chain-smoking habits getting the better of her. Ping was quick to her assistance and called for a motorbike to take her up to the hill tribe village. Unfortunately this call took a while to get through as we were in the heart of the jungle by this point. Therefore with Lola slowing us down it became a very long trek in the afternoon heat up the mountain.

Up and up we hiked, gradually the trail became very overgrown and we thought we had gone the wrong way because Ping had waited behind with Lola for a motorbike. Fortunately the path eventually opened up and we were 1200 metres up on the crest of the mountain. We had reached the Lahu tribe. Soon Ping rejoined us and showed us where we would be spending the night, in what he called a ‘bamboo hotel’. It was in fact half of a family’s bamboo house. It was amazing, the difference in living was eye-opening and the family who we were staying with were very welcoming, especially the children. The temperature was no longer sweltering, there was a lovely zephyr, and it was perfect to enjoy with a bottle of Chang (strong Thai beer), which they happened to have as a little business selling in the village. 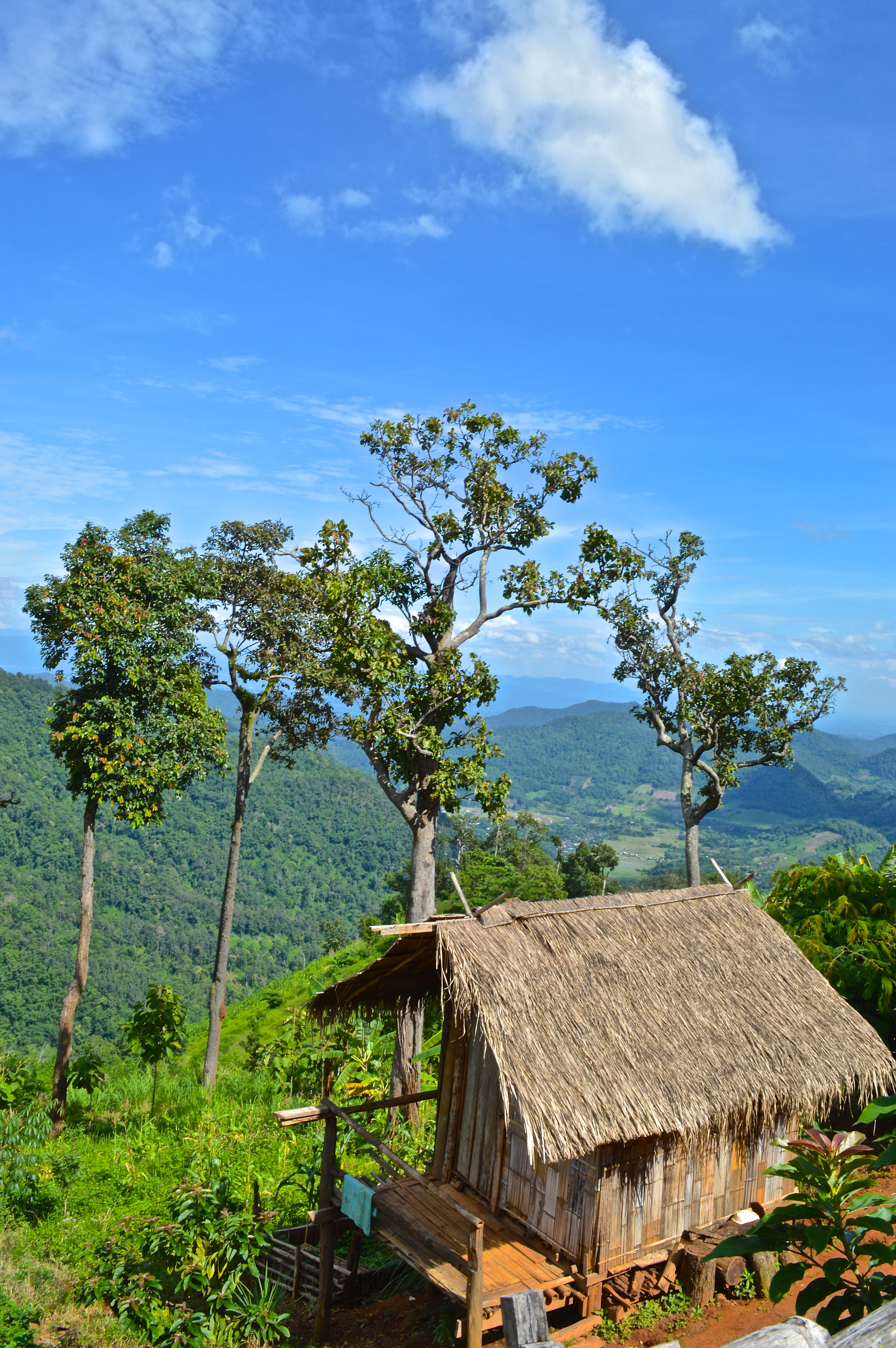 We wandered around the village photographing the locals and having an explore before heading back to our bamboo hut for dinner. The family were cooking with Ping and just as the sun set we were served up one of the most delicious curries I have ever had. There was one with tofu and one with chicken, both were incredible. After dinner we made a campfire and sat around. The Lahu children then put on a little performance for us which was great. We donated some money towards their schooling. Then it was our go, to sing a song from our countries. This was great fun, and the children seemed to enjoy it a lot. After a long night around the campfire we made our way into the bedroom, covering ourselves in DEET and mosquito nets, there was no way we would be bitten tonight. 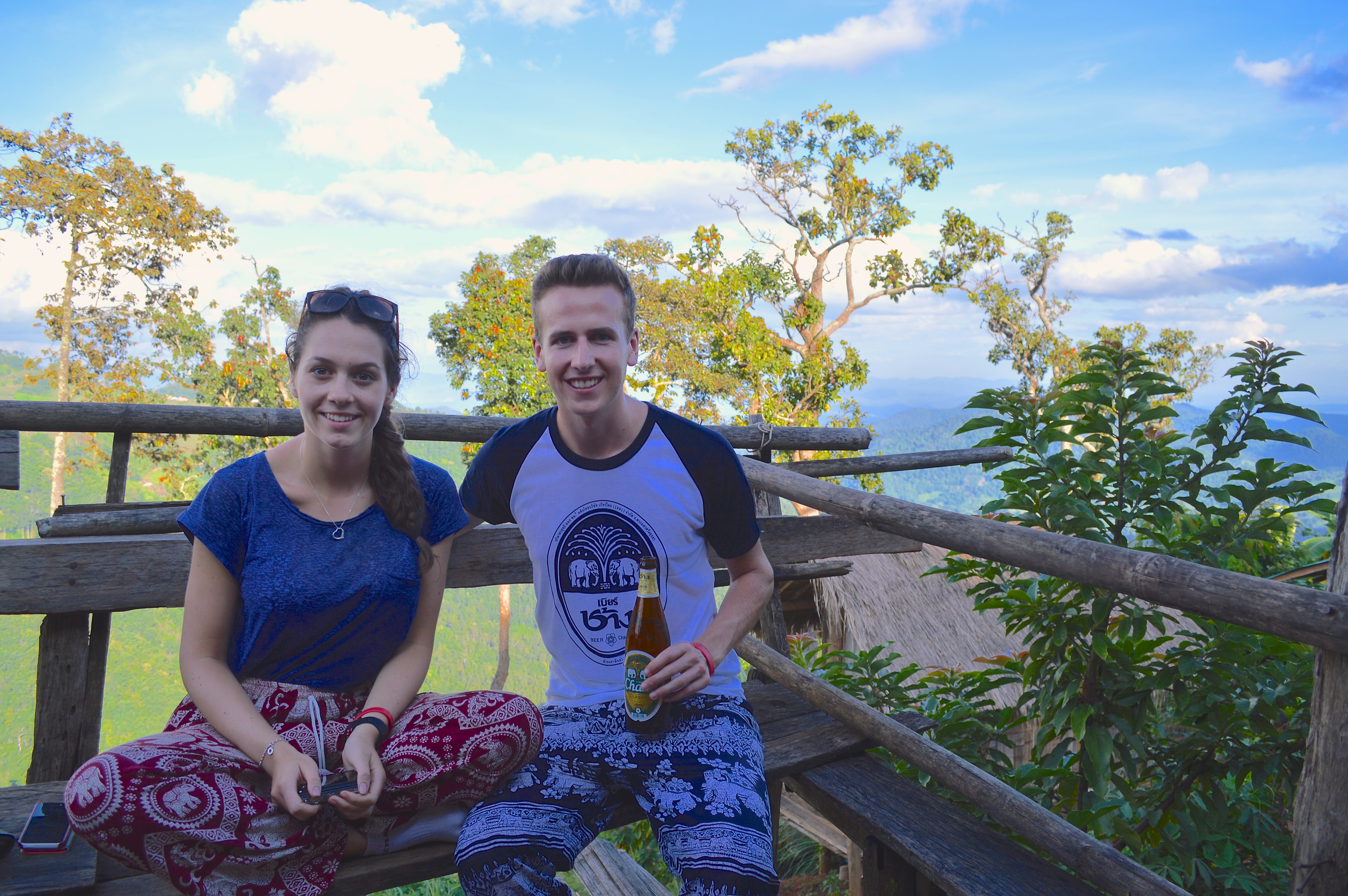