When I visited Thailand in the summer I left with no plan of what I was doing with my three and a half weeks, I had only booked accommodation for the first two nights in Bangkok, after that it was anyone’s guess where I would end up. Looking back it is easy to think that this may have seemed quite daunting, heading to a country without a common language, alphabet, or any idea what it would be like. However I didn’t think about it like this at all, in fact the idea hadn’t even crossed my mind. I was just looking forward to going there and having an adventure. If getting around was difficult then it would make it more challenging. However what I found time and time again was that navigating this vast country was actually very easy, very cheap, and extremely enjoyable.

Meeting and talking to people in hostels or bars is a great way to find out what other travellers have done to get recommendations so that you can see the best bits. We had heard from loads of people that Chiang Mai was amazing and a really nice place to visit, to see the temples and to go on treks. This latter part particularly appealed to me so on our first day in Bangkok we headed to the train station to try and book some tickets. It was so easy, there was an English speaking woman to help us, she told us the times and the prices then told the woman in the ticket office what we wanted. Then for just £14 we purchased our second-class sleeper tickets on the 15 hour overnight train journey to Chiang Mai.

The train was a great experience; it had a restaurant car which brings you freshly cooked meals, for an extremely reasonable price, right to your seat. They then erect a table and you can begin feasting. There were loads of really nice people on our train, fellow travellers and Thai people heading North for the weekend. When the night was upon us the guard dismantled our seats to transform them into a bunk bed, the bottom one is quite spacious so definitely choose that if you have the choice. Unfortunately I was on the narrow top bunk, which didn’t provide the comfiest nights sleep. I’d also recommend an eye mask and ear plugs, they always come in useful for overnight journeys. What wasn’t useful was the trains engine, as it broke down halfway through the night, this meant that our journey lasted over 19 hours meaning we arrived in Chiang Mai after midday. On the plus side this meant we could take in some of the amazing jungle scenery as we chugged along in the morning!

After an awesome time in Chiang Mai trekking we were keen to explore the south of Thailand and it’s islands. If we wished to travel overland this would mean sacrificing around two days travelling, feasible on a longer visit but not for our whistle-stop three and a half weeks. We looked online for flights but struggled to find any reasonably priced ones; in a last ditched effort we headed to one of the many travel shops in Chiang Mai. Just ten minutes later we emerged with our itinerary to get to Koh Samui. It would take us a day, as we would take two flights, a coach, then a boat, however this worked out much cheaper than anything we had found on the internet.

The Thai people are so amazing. When we checked in for our first flight with Thai Lion Air due to my height I was upgraded, for free, to a seat with extra legroom. Once on the plane it was extremely efficient and impressive, something some of the UK budget airlines could learn from. During a brief few hours at Bangkok while we waited for our second plane we were astounded that everything in the airport was so reasonably priced, the 7-11 prices were the same as on the street, when normally food is so expensive in airports. Not wanting to miss this opportunity we stocked up on food and drink for the rest of the day. The rest of our journey was just as simple, our plane arrived on time so we were directed onto an earlier coach to catch the ferry over to Koh Samui. From start to finish we were guided where to go and where we should get off, it was a very efficient service by Air Asia.

Whilst on the islands taxis are very expensive as they run off gasoline rather than gas (like they do in Bangkok) therefore they are a lot more expensive than on the mainland. However motorbike rental is very cheap so if you are a proficient rider I would recommend doing this. Unfortunately I had never ridden one before so although I have a driving licence we had to catch the large Tuk-Tuks around the island, cheaper than taxis but not as cheap as renting. If I go again I will definitely learn to ride a motorbike first! Getting between islands is a piece of cake, there are piers everywhere and all about the same price, so just head to your closest one and they tend to run every hour or so, so hopefully you wont be waiting long! 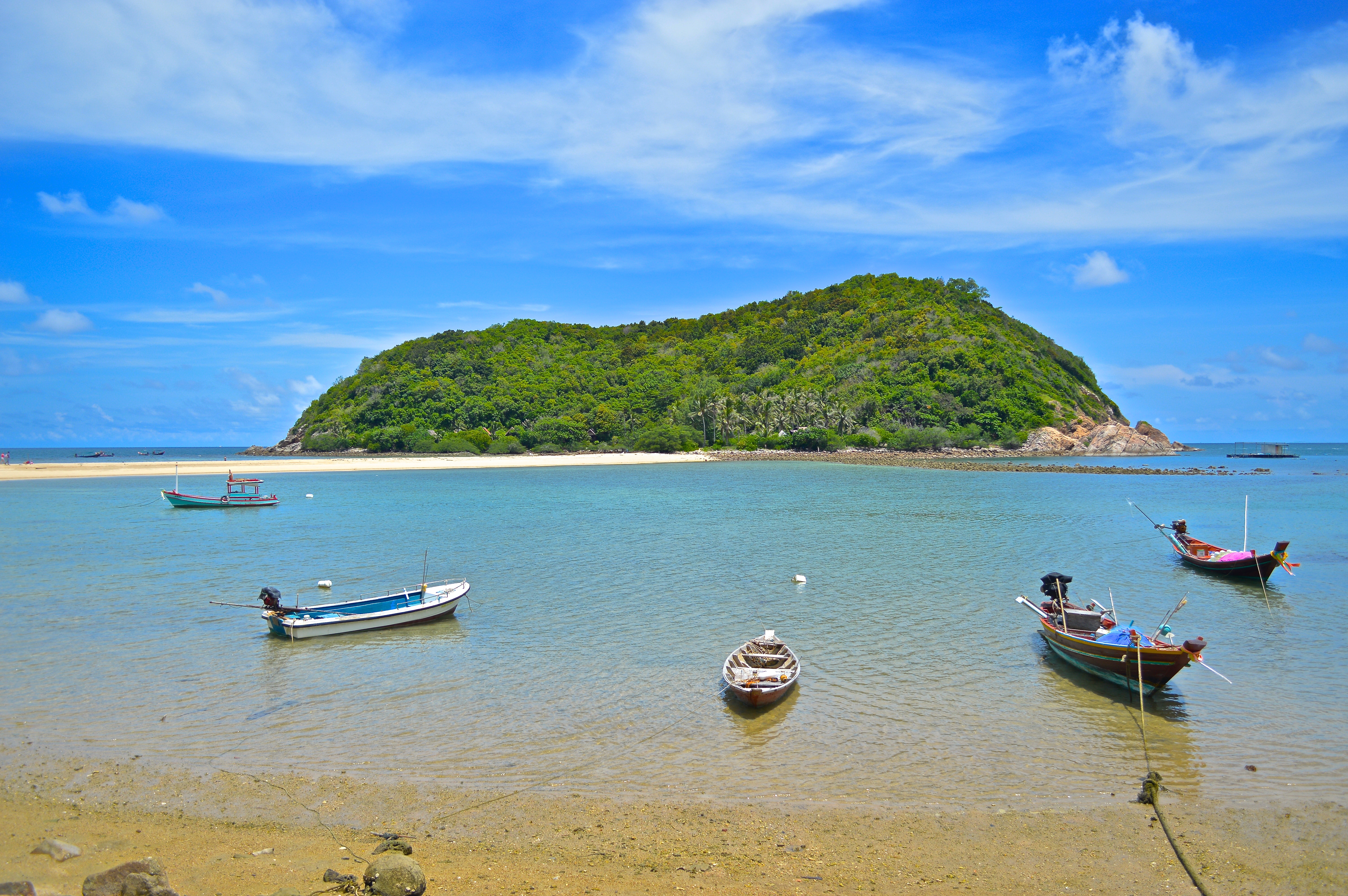 Buses are a great way to get around cheaply. Especially in Phuket if you stay in Phuket Town then you can easily get buses all around the island cheaply. Also if you get to know the bus routes in Bangkok this could save you loads of money, however the taxis are so cheap if you get them to use the meter so I would recommend just doing that. It can take a while being white and English speaking to get them to use their meter however if you’re not in a rush just walk in the direction you want to go and hail them down until one agrees. The best thing we found was to hail one that is already moving or one which people have just got out of, and don’t get in unless they agree to use the meter first. Avoid taxis where they want to take you on a tour as they drive around the houses and you will get to your destination very slowly. If you have been caught out by the mad Bangkok traffic jams then taxis aren’t an option. You might have more luck with a tuk-tuk however your best bet will be a moto-taxi, these mopeds can zip through the traffic and get you to your destination quickly. Without these we would not have made our train to Chiang Mai! Alternatively if you are near the river in Bangkok the riverboats are fantastic, offer great views and are so cheap, most people will help you find your closest pier. 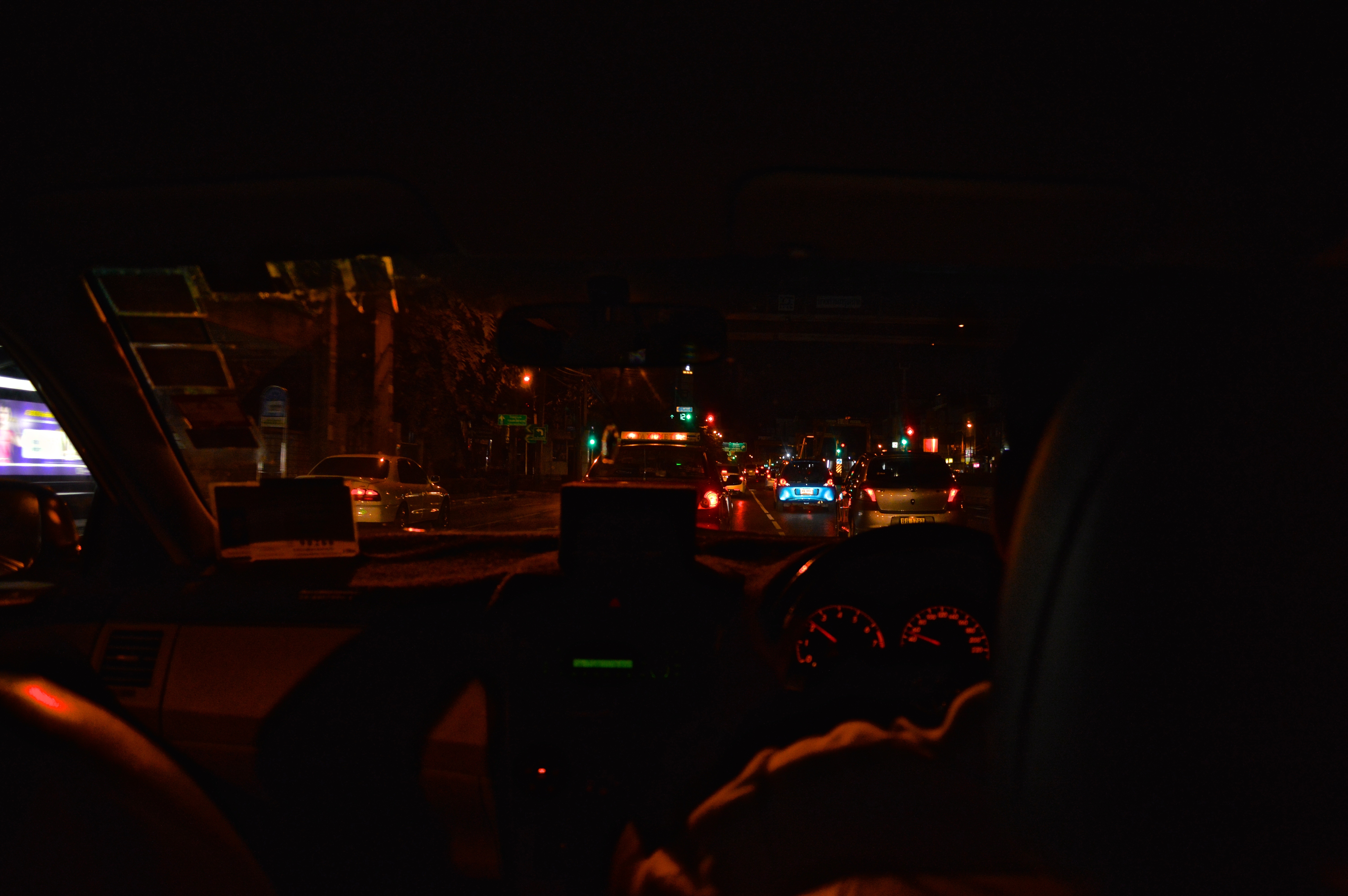 Taking a taxi at night through Bangkok. 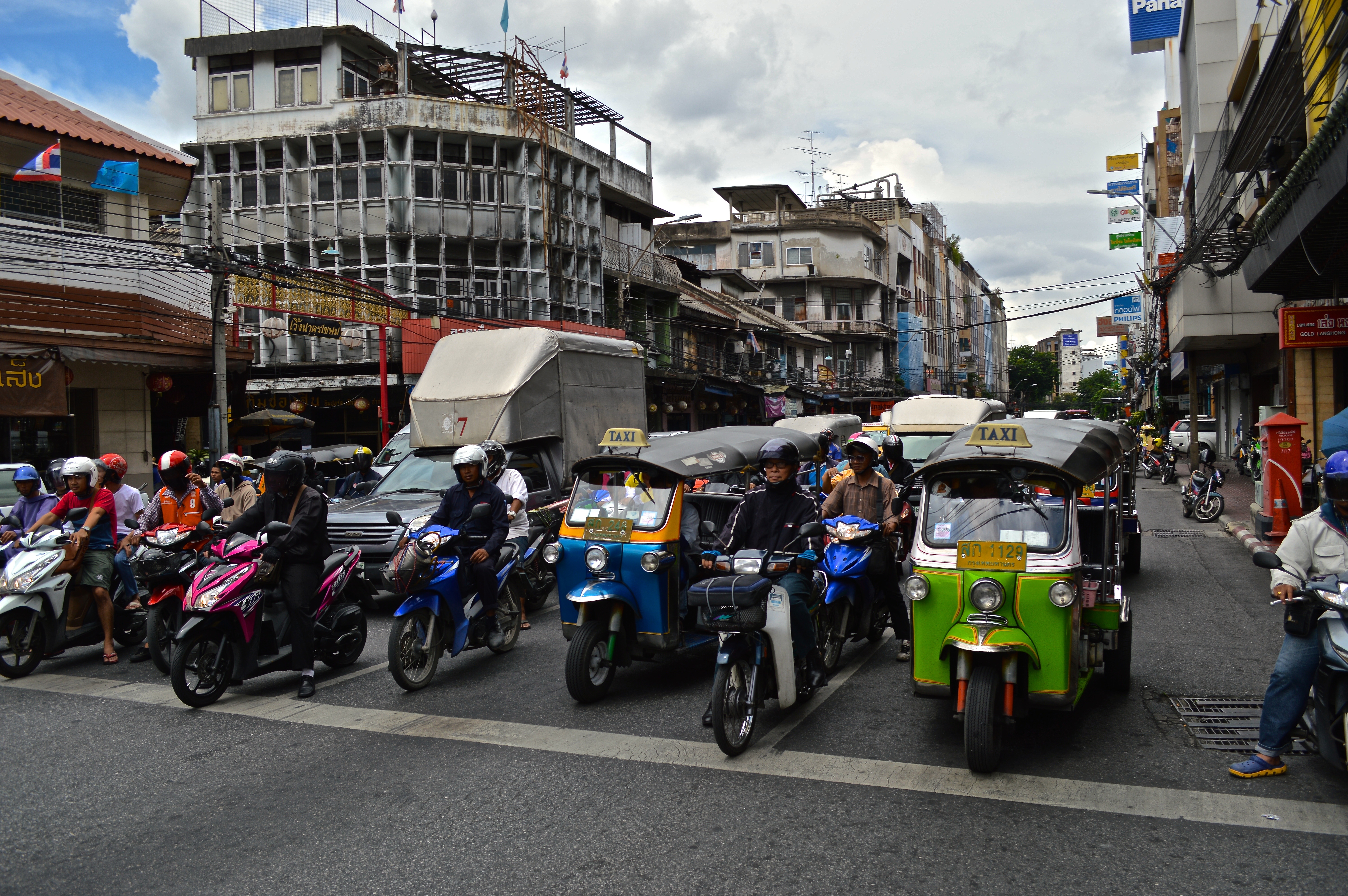 Tuk-Tuks and Moto-taxis waiting at lights in Chinatown 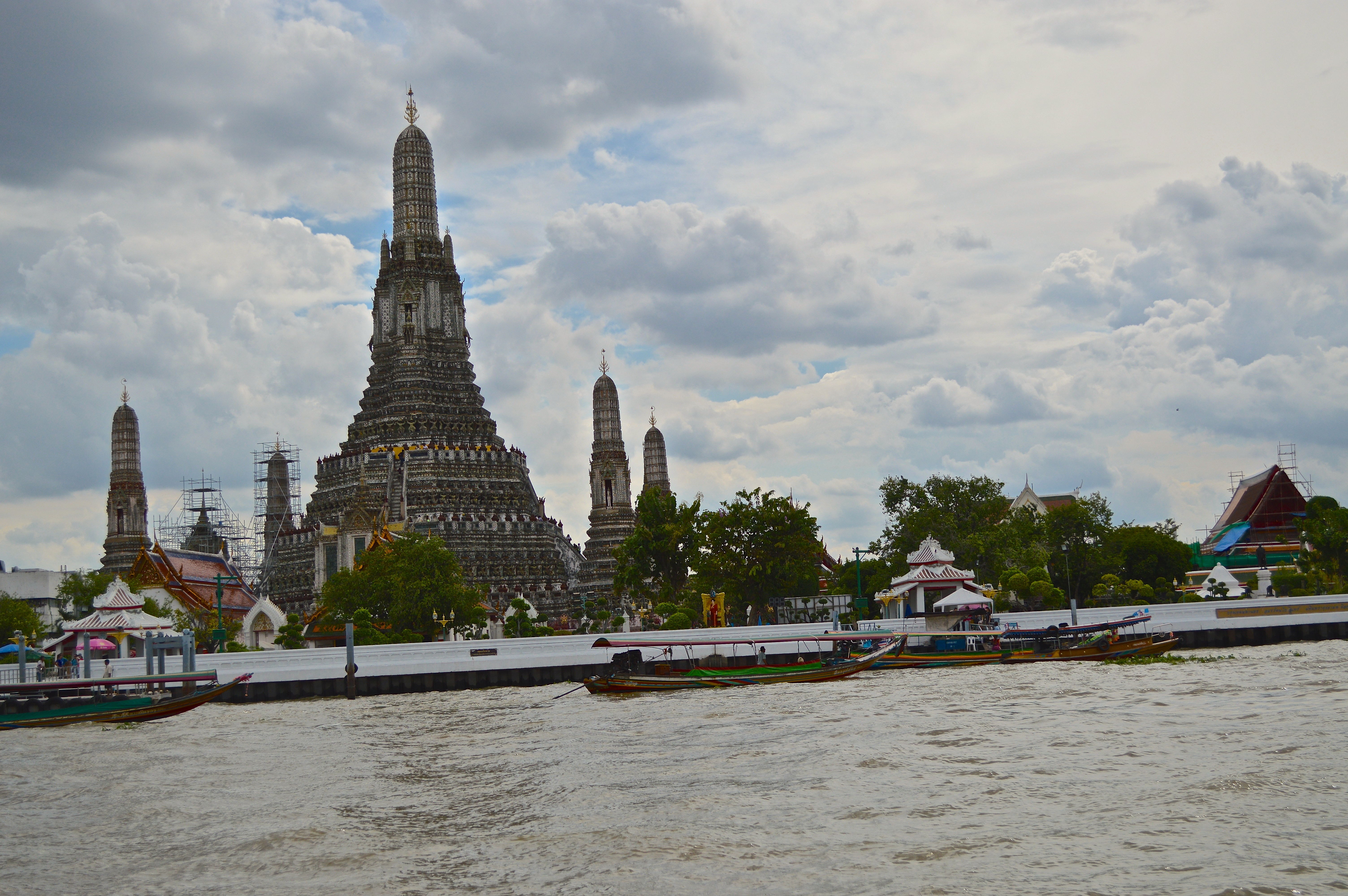 View from the riverboat in Bankok.

When we were travelling from Phuket to Bangkok in order to catch our plane home we decided to take the overnight bus. It is cheaper than the train and also faster so we thought we would give it a go. We opted for the first class bus, as it had air conditioning and a toilet for not much more money. When we got on we were astounded. There were airline style first class seats, which fully reclined almost making a decent sized bed. A food and drink box of goodies on our seats, blanket and pillow. It surpassed all our expectations of Thai public transport. Even better the ride of the coach was really comfortable and I slept much better than on the train. The coach even stopped halfway so that we could enjoy a nice hot meal, included in the price! I’ve been on long coach journeys before but this surpassed them all, and was a lot cheaper. 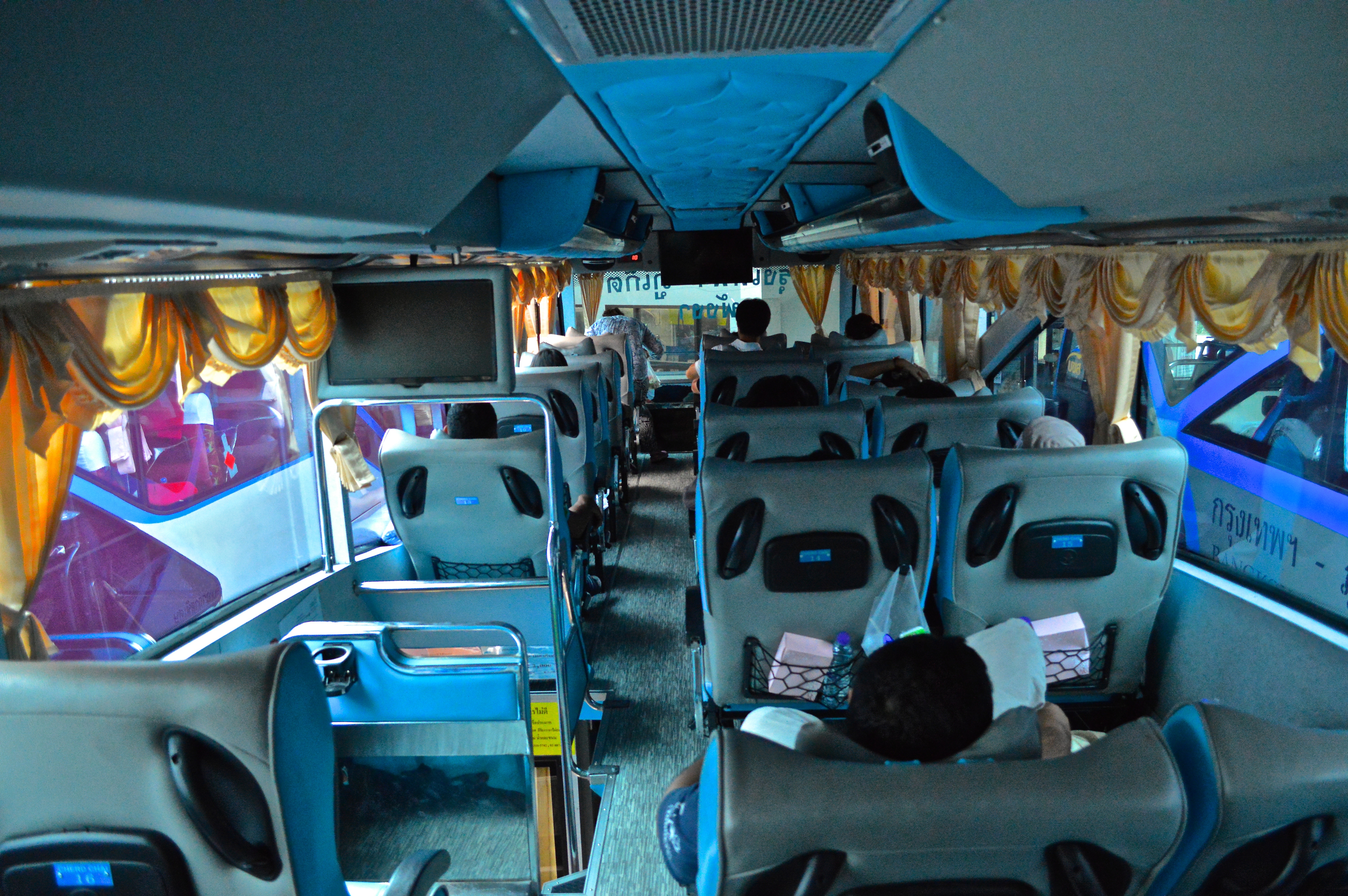 Getting around in Thailand is so much fun, you can explore so much of the country just using public transport and even then just rent a moped and head up to explore some mountain temples from Chiang Mai. The tourism in the country is growing very quickly and they are very used to dealing with travellers. This makes getting around really easy as they will have dealt with someone like you many times before so you can rest assured you will get to your destination with minimum hassle. Getting around was without doubt one of the most enjoyable parts of my trip and I recommend anyone visiting Thailand to just go and see as much of the country as they can, it’s really easy.

One response to “Getting Around In Thailand”