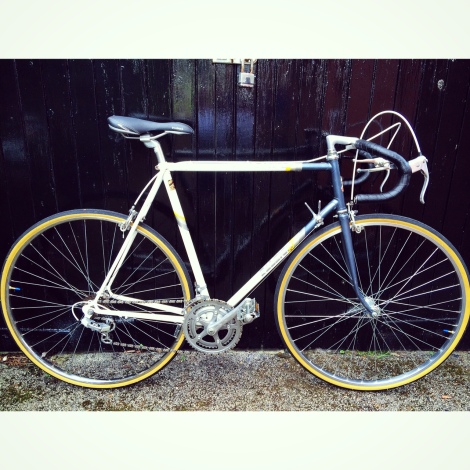 Over a year ago I posted about how I bought and converted an old Raleigh road bike into a fixed gear. I was so proud with my conversion that I didn’t want to take it to university, in case it was stolen (as bike theft in Oxford is rife). Therefore I made another one with a frame I got off eBay for less than a fiver. It was cheap, cheerful and really fun to ride. However I did struggle getting up any hills which had gradients of over 8%, making going on longer rides difficult. I kept most of the parts from the Raleigh when I converted it to a fixed gear and part of me also wanted to build up a geared bike as a new challenge. Therefore I decided over the summer that this would be my new project. I would convert and restore the Raleigh Equipe to its former glory so that I could have a nice vintage road bike to ride at university and go on some longer rides.

Before I began, the starting product.

I thought I would begin with the wheels and work my way up. Fortunately I had kept the original wheels from when it had been a geared bike. However as you can see from the photo when I received the bike it had obviously not been ridden for a number of years. The wheels were full of corrosion and rust, I had no idea whether I would have to purchase new ones (something I wasn’t too keen about) or whether I would just have to ride rusty ones for the time being. However as you may have read on my post here, after a good many hours toiling away with the steel wool they were looking amazing. I was so happy and amazed with the results; I was astounded how different they looked after just a bit of elbow grease. 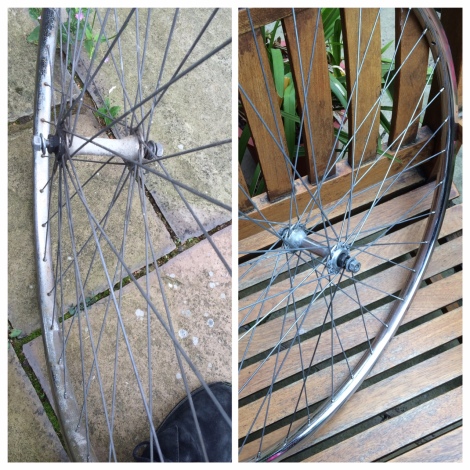 I purchased new Raleigh 630mm tyres from eBay, just £15 for a pair of brand new tyres and matching inner tubes, a great deal. This meant that the wheels were now truly looking brand new! I rummaged around in the garage trying to find the old derailleurs and gear shifters, which I had taken off the bike to convert it to a fixed gear. They were in a sorry state, both derailleurs looked like they were far past it and fit for the rubbish. However I put both in a large tub of degreaser for a few hours to see if that helped. After a few changes of degreaser they were looking a lot better. Again I got out my all-purpose cleaning cloths, brasso, and steel wool and went to work. It was a time consuming process however it worked! They were both now shiny, clean, and in working order.

The old chain had rusted solid so that was a no-go. However chains are cheap so I purchased a new Shimano one, along with new cables and bar tape. The old cables were worn and battered, never changed since the bike was purchased first in 1986. I then set about using my polishing/de-rusting technique on all the exposed metal parts of the bike to make them shine. This worked well and I managed to successfully get a couple of decade’s worth of gunk and rust off the crankset.

Once everything was as de-rusted and clean as it could be I began finally building it up. First I put on the derailleurs and wheels. Then I measured and fitted the chain before replacing the cables, first the brakes and then the gears. I had never replaces cables before however it turned out to be a really easy job; also very inexpensive. I adjusted the derailleurs as I put the cables in; this was made easier due to the simplicity of friction shifters. Then I replaced the bartape and she was finished.

The finished product, well worth the hours spent on it.

The whole job took me a couple of weekends solidly working, mostly polishing. However seeing the transformation now makes it totally worthwhile. I’m really happy with how it now looks, almost as it did when it came out of the factory in Nottingham almost 30 years ago. I have now been out on some small rides on it and it feels really nice, I particularly like the feel of the larger wheels, which run nice and smooth. On reflection I may change the bartape soonish because I went for the cheapest available and it is a bit too cheap for my liking. I think it would look good with some leather bartape and maybe a Brooks B17 saddle, something for the future maybe. 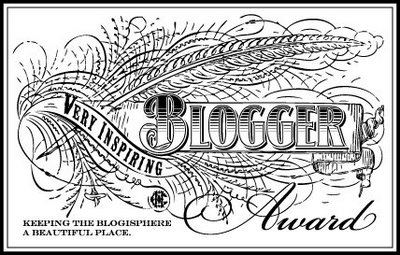